Accueil > French presence in the US Southeast > Honored French citizens > A man of many talents : Jean Marie Edouard Mille

A man of many talents : Jean-Marie Edouard Mille

The Austrian-British philosopher Ludwig Wittgenstein once stated, “The limits of my language are the limits of my world.” On the same wavelength as Wittgenstein, Jean-Marie Edouard Mille—fluent in English and German with a moderate level of Spanish and Italian—has wielded his love of languages into a powerful tool that has opened him up to a world of opportunity and discovery. 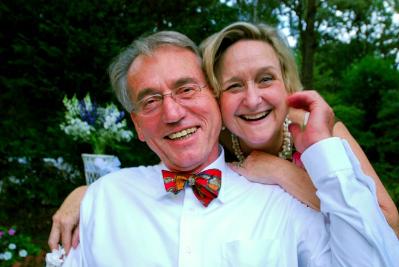 Born in a small village in the Haute-Marne region of France, Jean-Marie Edouard Mille owes his passion and aptitude for English to his 6th grade English teacher who strongly pushed phonetics lessons on the class. Those lessons have been a faithful friend through the years, helping Mille speak with little trace of a French accent. Upon completion of his English degree in Nancy, he made his first trip to the United States to teach French abroad for a year and attend classes at the College of Charleston in South Carolina.

What marked Mille at first, like many Europeans, was the size of the U.S. People joke that everything is bigger in the U.S., but in the early 1970s, Mille was truly impressed by the space and the size—the surface area of the country, the skyscrapers of New York, the cars, even the bathrooms. He found Americans to be very relaxed, warm, and easy-going—fortunately, indeed, considering his first experience in the territory !In fact, the French travel agent who booked his initial flight to the U.S. did not realize that there might be more than one Charleston… Mille found himself alone in West Virginia, several states away from his destination ! Some kind folks brought clarity to the young Mille, put him up in a hotel and helped him get a plane ticket to the right Charleston, South Carolina—but not before a local journalist caught wind, publishing an article, “French man gets geography lesson.”

During his year abroad, Mille fell in love with a local girl, who he later brought back with him to France. In 1974, the two married and settled in South Carolina. Though he had a strong grasp of the language, culture was another matter. “Of course there were cultural differences that led to little disputes,” he shared. “That’s just the way it is.” His first year of law school helped with that—throwing him into the very heart of this country with crash courses in American history and culture. He obtained his juris doctorate in 1979 and has been practicing law in Columbia with his private firm, Mille & Associates LLC, since 1985.

Today, Mille has made a very good life for himself. His practice is going well, and has even enabled him to practice his Spanish from time to time. Passionate about soccer, he played regularly on the local team until three years ago, and still occasionally plays in tournaments. An extremely proud father, Mille boasts of his two grown sons who are living their dreams in the medical and music fields.

Well-adjusted in the community with many American friends, he and his wife are also very implicated in the Alliance Francaise of Columbia. As president of the association, Mille enjoys creating events that bring people together and celebrate the French language and culture. One of their prized activities is the French theatre troupe, which annually stages a French classic. Performances have included Moliere’s “Le Bourgeois gentilhomme”, Voltaire’s “Candid, oul’optimisme”, and Eugene Ionesco’s “La Cantatrice chauve”. This year, the troupe—which includes the theatrical talent of both Mr. and Mrs. Mille—presented an original work in conjunction with the Columbia Museum of Art that was inspired by the Dixon Gallery and Garden’s Collection currently on display at the museum.

In today’s globalized world, there is very little that Mille misses. He now has access to the food that he used to long for, and in fact he often cooks French cuisine. He watches TV5 to keep informed about events, culture, and film back home, and of course he go back to France regularly to see his 2 brothers, 2 sisters, and parents who, this summer, will celebrate there 65th anniversary !

Whether through traveling around the world, kayaking around the marshes behind his summer home on Edisto Island or enjoying the way books and music transport him—Jean-Marie Edouard Mille, man of many talents, lives to discover new things and to enjoy the richness of all that life has to offer.