Home > A breakthrough in gene therapy by researchers from Duke University (North (...)

For the first time, researchers corrected a genetic anomaly directly in affected cells in adult mice, which improved the symptoms of a serious genetic disease. 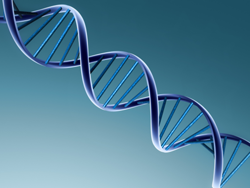 CRISPR, a new genetic modification tool has been revolutionizing the biology and health community since its discovery, less than five years ago.

This tool enabled the development of molecular scissors that can precisely recognize a genetic sequence. Including this tool in gene therapy strategies brings major hopes in the treatment of serious genetic illnesses, some of which are not currently curable.

In combination with available technologies in gene therapy, direct genetic editing of affected cells to correct the genetic sequence responsible for a disease, is now a more accessible possibility, thanks to this tool.

This is what three independent research teams –including one from Duke University, NC- achieved. Researchers focused on Duchenne myopathy, a rare disease affecting approximately one birth in 3,300. This disease is caused by a genetic anomaly and leads to severe muscle dystrophy. Patients are usually confined to a wheelchair by their teenage years and their life expectancy is drastically reduced by more than thirty years. There is no available cure.

The American teams have developed a gene editing approach using the CRISPR tools and tested it in a mouse model of the disease. Their objective was to correct the genetic anomaly after birth in affected muscles and to evaluate whether the symptoms improved.

Their results were published on December 31in the prestigious journal Science and reported an improvement of the symptoms in the mouse model of the disease. With the correction of the genetic anomaly in some of the affected muscle cells, the sick mice partially recovered some of their muscle function.

This work was done in a mouse model, but the mutation is very close in humans and these results are extremely promising for the numerous patients suffering from genetic illnesses. Finally, the possibility brought by CRISPR to modify the genetic code of cells in adults speaks underlines the revolution triggered by this breakthrough technique.

For more information on these studies or on the genetic tool CRISPR:

More science and technology news on the website of the Office for Science and Technology of the Embassy of France to the US www.france-science.org