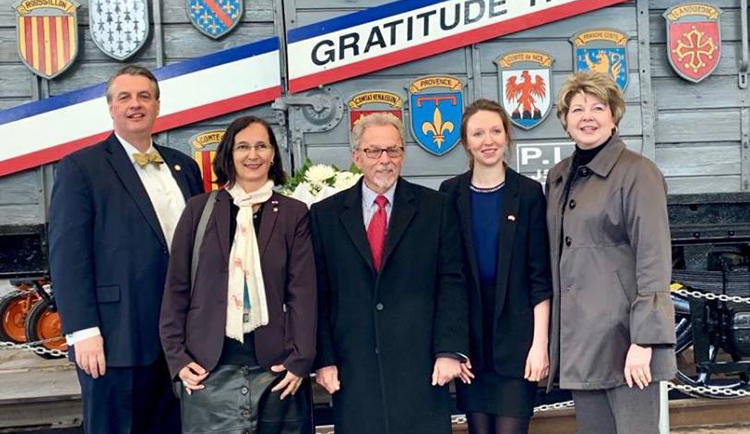 Over the course of 49 days, the town of Spencer, N.C. is highlighting French-America friendship with an event series that commemorates the arrival of a gift-filled train car 70 years ago from France, just after World War II.

The French Consulate General in Atlanta was honored to take part in a February 9 commemoration of the car’s arrival, a ceremony that served as a strong reminder of the many ties that bind the United States and France.

The Merci Train, as it has come to be called, was a thank you in response to the 700 train cars that the United States had sent to help reconstruct Europe after the war, filled with food, medecine and aid.

The boxcar that arrived in North Carolina from France was part of a fleet of 49 cars — one for each state plus the District of Columbia — which were distributed throughout the United States in 1949.

The people of North Carolina,, including then Governor Scott Kerr, gathered in Raleigh on February 8 of that year to marvel at the treasures that the newly arrived boxcar contained, including cultural goods and handicrafts from France.

Among the vases, medals, wedding dresses, hand-made clothing and other items was a knot made from remnants of the French and American flags flying from the Eiffel Tower when Paris was liberated.

To mark the 70th anniversary of the train’s arrival, part of the collection was loaned to the NC Transportation Museum, which houses the original Merci Train boxcar. The exhibit will be open to the public throughout the 49 Days of Gratitude celebration.

The February 9 ceremony, which kicked off with a parade, included speeches by Kevin Cherry, deputy secretary of the N.C. Department of Natural and Cultural Resources and Anne-Lise Gallay, deputy cultural attache at the French Consulate, who also participated in a wreath laying in front of the newly restored boxcar with Spencer Mayor Jim Gobbel.

A majority of the original 49 train cars exist to this day and are on display at parks or museums across the United States. Find a Merci Train boxcar near you on the official website.

And for more information on the Merci Train and the 49 Days of Gratitude, see the event series’ website.