In a continued effort to honor American WWII veterans who participated in the liberation of France in 1944-1945, Consul General Louis de Corail hosted three ceremonies in Tennessee and North Carolina where he bestowed the Legion of Honor upon 12 U.S. veterans.

Another ceremony was held on November 11 at the Veterans of Foreign Wars in Indian Trails, NC where the following veterans received the rank of knight in recognition of their courage: Charles J. Richardson from Charlotte, NC ; Andrew J. McMahon from Blythewood, SC ; William T. Rachui from Mooresville, NC ; James B. Crump from Indian Trail, NC ; Aster R. Rider from Lexington, NC and Harold M. Granger from Greenville, SC. 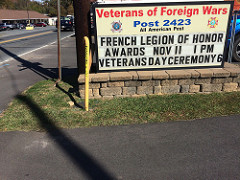 Finally, four veterans from North Carolina were awarded the Legion of Honor at a ceremony hosted at the State Capitol in Raleigh on November 17 : John P. Irby, III from Raleigh, NC ; Salvatore Maiello from Fayetteville ; Morton Jacobs from New Bern, NC, and Robert C. Senter from Fuquay-Varina, NC. 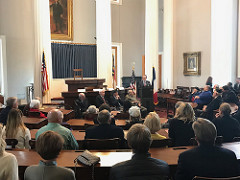 To view more photos of the event, click here.

“As we approach the 75th anniversary of D-Day in 2019, it is inevitable that the living memory of those who fought to restore freedom to France in 1944-1945 is slowly going out, but we remain resolved to honor these brave men and to assure them that we, the French, we will not forget their courage and sacrifice,” said de Corail.

The National Order of the Legion of Honor is the highest military honor in France. Founded by Napoleon Bonaparte in 1802, it recognizes eminent services to the French Republic. Recipients of this honor are designated by the President of the Republic, Emmanuel Macron.